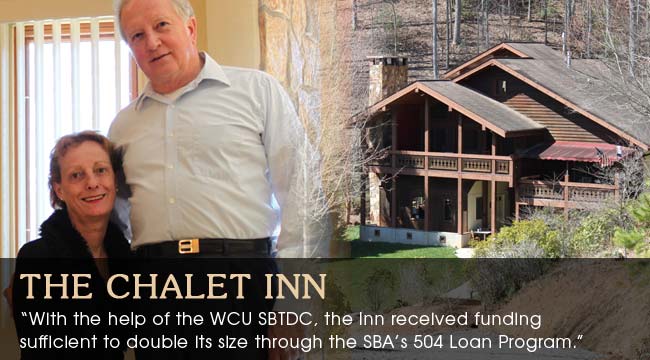 As an Army Officer, George Ware spent seven years in Europe where he was introduced to German bed and breakfasts (known as Gasthauser) and met and married his wife Hanneke. They traveled Europe and dreamed of owning their own bed and breakfast. Returning to the United States in 1989, the two decided to make their dream a reality.

The Chalet Inn, nestled in the Great Smoky Mountains overlooking Dillsboro, North Carolina, opened for business in 1993. It is a reflection of their love of German culture and architecture evidenced from the design of the rooms to the front-hanging wrought iron sign created by an award-winning German blacksmith known as an “Aussenhangenschild.” The Inn offers a retreat for singles and couples getting away from the hustle and bustle of daily life. By the mid-2000s, it became such a popular destination that the Ware’s had to turn people away. They knew it was time to expand.

In 2008, the Wares gathered their detailed financial records and went to the bank to apply for an expansion loan. They were shocked when they were rejected, but as they walked out the door the loan officer said “You should go out to Western Carolina to see Wendy at the SBTDC for financing package assistance.” And they did. George and Hanneke worked with Wendy Cagle, regional director of the SBTDC at Western Carolina University, to develop their business plan and financial statements. By the time they went to meet with Wendy again, she had started a new financial spreadsheet for the Inn. “She was really excited about helping us, which I was happy to see,” George said.

They were seeking funding for a new building and furniture, and were willing to contribute 15% of their own funds. Aware of new SBA rules, Wendy assisted them by rolling the equity and refinancing of their existing building into the funding request; more than doubling their capital investment in their business.

Despite tough economic times The Chalet Inn is thriving and thankful it has a cash reserve. Sales for April to December 2010 were up 45% and October (their peak month) up 86%.

George and Hanneke credit much of their success getting the expansion loan to Wendy’s assistance with research, data gathering, networking and being an expert business advisor.

“Without the help of the SBTDC we never would have received this loan,” said George. “Wendy helped us translate our vision for the business into a plan for growth.”