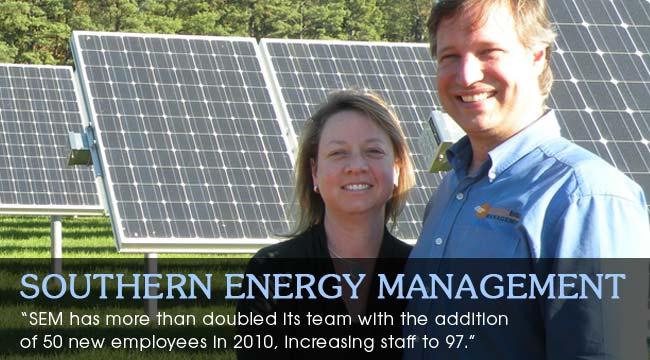 With a passion for sustainable energy and the future of our planet, Bob and Maria Kingery founded Southern Energy Management (SEM) in 2001, offering high-quality energy efficiency and solar solutions around the Triangle.

Along with Mark, the SBTDC’s Mike Seibert, Dave Park and Pete Donahue administered the Baldrige “Are We Making Progress” survey, which helped SEM establish benchmarks for company performance and team member satisfaction. This baseline snapshot made it easy to see areas for development so SEM could take action to address team members’ needs.

Bob and Maria also wanted a way to align team members’ actions with the overall business strategy. Through collaboration with the SBTDC, the balanced scorecard was developed and implemented, which has helped align daily operations with longer-term, strategic priorities. Every team member now has a scorecard, and strategy is being linked to action; as a result, they are seeing dividends. “One of the field raters said for years that he could get more builders to switch to more energy efficient building, but he never did…until he put it on his scorecard. This is a complex, living document. Without the help of the SBTDC, we would not have been able to get it to the point it is,” says Bob.

The balanced scorecard also allows SEM to quantify community involvement. Every team member is expected to do 4 hours of community service. Community ties are much deeper now, a reflection of SEM’s triple bottom line: people, planet and profit.

SEM is now a leader in energy efficiency and solar power in the region, and the support of the SBTDC has been an asset to its fast-growing business. Sales have increased more than 300% from 2009 to 2010, and a change in banking relationships facilitated a 200% increase in available short-term working capital. The SBTDC also coordinated placement of an MBA student intern who assisted with the design and measurement system that visually represents actual versus expected energy output of energy solutions.

The company serves homeowners, builders, businesses and military/government clients in over 10 states in the eastern half of the country. SEM has more than doubled its team with the addition of 50 new team members in 2010, increasing staff to 97 throughout four offices.

Due to its success, SEM has received several awards. Honors include National Energy Star Partner of the year (5 consecutive years), SJF National Green Jobs Award, and the City of Raleigh’s 2011 Environmental Stewardship Award.

Bob and Maria credit the SBTDC as supportive, responsive and objective. Bob says, “You don’t have to be an expert in every area of your business; you just have to know when to ask for help. The SBTDC is an objective third-party point of view, and highly valuable for entrepreneurs.”