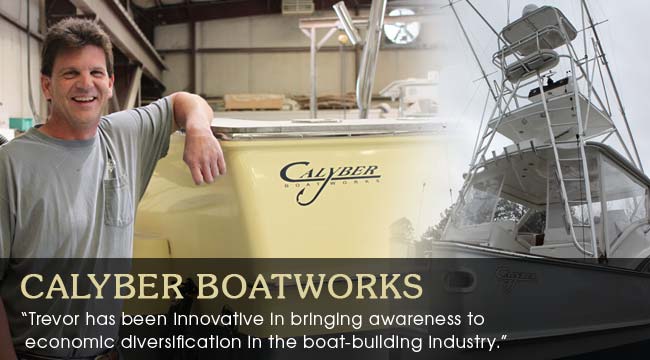 Trevor Sherrick was in the boating industry for 10 years before going into business for himself. Having worked for Buddy Davis, a builder of large custom-made luxury sport-fishing yachts, it was Trevor’s goal to create similar boats on a smaller scale, making them more affordable to the general public.

It was important to Trevor to take a “green” approach in his business. Calyber Boatworks incorporates an environmentally friendly construction process with the latest technology, which results in one of the most efficient boats in the world. The company switched to a new power system, the Volvo IPS engine, which burns 30% less fuel than any other engine. Less waste is created by using materials that come in kits, and every chip of teak wood is saved so that it can be molded together and reused. Vacuum infusion is used so that chemicals are not emitted into the air, and leftover fiberglass is shared with other local builders. “People think if I don’t have fiberglass waste, it must be somewhere else,” says Trevor.

As the economy took a downward turn, Trevor knew he had to diversify in order to stay in business. He called in  help from SBTDC business counselor Michael Twiddy, who helped Trevor look at opportunities to diversify with new products. Since then, Calyber Boatworks has been busy researching and developing ideas for new products that can be built from fiberglass. They are currently manufacturing components for F-16 flight simulation units under a federal government contract.

Calyber Boatworks is also developing several new product ideas around the green economy. In 2010, Trevor went to a green energy seminar in Raleigh where he met a group of green energy professionals. Together they came up with the idea for the “Sprout,” an 8-foot tall, selfsufficient computer that tracks weather data through a Wi-Fi database. The fiberglass kiosk is produced at the Calyber Boatwork’s plant.

Another key asset in the making is a solar foundation radiator (SFR), which will store passive solar heat in the crawl spaces of residential homes. With the help of SBTDC’s Barry Phillips, Trevor has a full-blown business plan with financials on hand. “It’s ready to go, and will be key for obtaining capital,” says Michael.

For years, the company has been solving problems and creating solutions. Michael says, “Trevor has been innovative in bringing awareness to economic diversification in the boat-building industry.”